The Church Ceiling
Continuing up to the choir stall and overhead on the ceiling of the chancel are six stenciled designs, attributed to Henry Vaughn, in six repeated patterns: The crown of thorns with three nails in the center; the first three Greek letters of Jesus, “IHC”; the first two Greek letters ‘px’ of the title Christ (Messiah); pillars with a whip and sword represent Christ being scourged by soldiers (sword); the ladder, reed, sponge, spear and lantern were used at the crucifixion and the purse represents Judas's betrayal; and the cross, hammer, pinchers and pliers were instruments used to secure Christ to the cross. 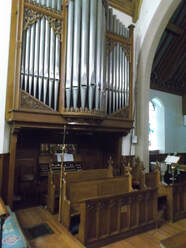 The Church & Chapel Organs and Piano

The Fisk Opus 59A Organ located in the Chapel

Originally built on speculation to be identical to Opus 59, the organ was purchased before completion by Frank Taylor for his home. Taylor, a student of Melville Smith, and enamored of French classical instruments, requested a number of modifications and additions: a Cromorne on the second manual, a 16' Basson in the Pedal (unified at 16', 8', and 4'), and a Tremulant. The stop action is electrical, and includes a combination action. Although the stops are essentially the same as those in its sister "Wellesley' organs, the drawknob nomenclature is in French. The organ was moved to nearby St. Barnabas (Chapel) following Taylor's death in 1985.
Fisk Opus 59A Specs

The Steinway Piano located in the church

The piano is a gift of Dr. Fredrica Harrris Thompsett, given in thanksgiving for the life of her aunt, Alice Emily Harris. It is used regularly on Sunday mornings, supplementing the music of our Hutchings pipe organ, and is a great resource for accompanying music in many genres.
The Parish Center and Chapel Garden
The Parish Center, built in 1959, is used for numerous community gatherings by many organizations and houses the Great Hall & kitchen, Music Room, Sunday School classrooms and parish offices.

Memorial Gifts
Many gifts were given to the church in memory of various Beebe family members whose efforts established the parish of Saint Barnabas’s. These gifts include the nine windows, the baptismal font, choir stall, altar rail, pulpit, lectern, communion rail, hymnal board, bishop’s chair, church bell (not cast by Paul Revere as is the one across the street at the Congregational Church), organ, chalice, communion service, alms basin, prayer book and painting.
In front of the church and to the left is its rectory. The recently renovated house was formerly owned by Caroline Hatch and sold in 1871 to Robinson Crocker Bodfish. E. Pierson Beebe purchased the house in 1901, had the house restored, and offered to rent it to the parish for $400 per year.
The Parish House and Chapel
Behind the church and to the right is Saint Barnabas’s Parish House. Dedicated in December 1890, it was a gift from Frank Beebe in memory of his mother and two sisters, Frances and Mary Louise. The house was originally used as a reading room or library for the town of Falmouth. The low wall bordering the western side of the church property was built in 1891 from granite boulders brought from fields near Highfield Hall.

The Chapel, located behind the church, was originally a carriage house built in 1894 in memory of Frances Lathrop Beebe Fiske by her children. In 1962 the carriage house was converted into a chapel by William W. and Evelyn Peters as a memorial to his parents. Some summer services and year-round weekday services are held in the peaceful chapel, as are weddings, funerals and special services.
​
In 2012, the Parish celebrated the 50th anniversary of the Chapel when it was renamed "All Saints' Chapel".
The Memorial Garden & Labyrinth
The Memorial Garden was established to commemorate the centennial of Saint Barnabas's Memorial Parish. The garden has been created to receive into the earth the ashes of the faithful departed and to memorialize those interred elsewhere. Names and dates are cut into blue stone slabs of varying size, set flush into the ground before the granite cross. The rough hewn benches, chapel wall and cross remind us of the permanence of Almighty God, creator of heaven and earth before all worlds and unto the end of time. The memorial trees, shrubs and flowers bring us to the reality of the risen Christ and the everlasting presence of the Holy Ghost, the comforter.

The Saint Barnabas's Labyrinth was established to commemorate the 125th anniversary of the founding of the parish. It is a place for prayer and contemplation which is open all the time. It is located to the south of the church overlooking Sider's Pond. There are brochures which give guidance on  and how to walk and spend your time. Walking the labyrinth can be a way for the psyche to connect with the soul, a way of seeking God. It may be a symbolic pilgrimage or a means of seeking clarity, vision, focus, healing, discernment, peace, or spiritual insight. The labyrinth is a spiritual tool. There is no right or wrong way to walk the labyrinth!